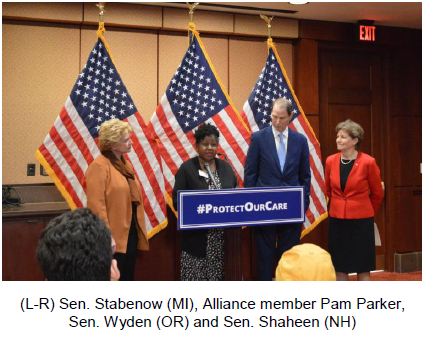 Jeanne Shaheen (NH) and Ron Wyden (OR) at the U.S. Capitol. The event raised awareness of attempts in the courts to strike down provisions of the Affordable Care Act (ACA) that would affect Medicare Part D prescription drug prices. Maryland/DC Alliance board member Pam Parker joined the senators and shared the cost of her prescription drugs.

The case of Texas v. United States, which is set to be heard before the Fifth Circuit Court of Appeals on July 9, could eliminate some of the key coverage improvements implemented after the passage of the ACA. If judges side with the Republican state lawmakers who brought the lawsuit forward last year, one of the most troubling repercussions could be a return of the wide Medicare Part D “doughnut hole” gap in prescription drug coverage.

The 2006 introduction of the Medicare prescription drug benefit was a major help for seniors, but the coverage had weak spots. One was the so-called doughnut hole; after a beneficiary accumulated a few thousand dollars in drug expenses in a year, they were responsible for the full cost of their medications. Another was the lack of an annual cap on drug spending.

The Affordable Care Act and other legislation has gradually closed the doughnut hole, so that by 2020 beneficiaries no longer face a coverage gap. Under a standard Medicare drug plan, beneficiaries pay 25 percent of the price of their brand-name drugs until they reach $5,100 in out-of-pocket costs. Once patients reach that threshold, the catastrophic portion of their coverage kicks in and their obligation drops to 5 percent.

Reopening the doughnut hole would put many seniors, including Ms. Parker, at risk of financial and medical ruin. Ms. Parker underwent a kidney transplant just five weeks ago, and, even though her health improved dramatically, she needs prescription drugs, including an anti-rejection medication and insulin, that carry a total retail price tag of more than $6,000 per month.

“I am terrified of the high drug prices I will face if the Affordable Care Act is struck down in the courts and the Part D ‘doughnut hole’ is reopened,” she said. “I truly do not know what I will do if that happens.”

“Opening up the ‘doughnut hole’ could require 5.2 million Part D beneficiaries to pay full price for their medications. That is truly disturbing,” added Robert Roach, Jr., President of the Alliance. “With prescription drug prices at an all-time high, we need to protect and expand upon the progress of the ACA in lowering out-of-pocket costs for not only seniors but for all Americans.”

Alliance, AFL-CIO Call on Congress to Address Drug Provisions in NAFTA 2.0 Before Vote is Held

On Tuesday, the Alliance joined organizations including the AFL-CIO at a “No Vote Until NAFTA 2.0 Is Fixed” day of action on Capitol Hill. Protesters delivered more than 300,000 petitions calling on Congress to delay a vote on the United States-Mexico-Canada Agreement (USMCA), also known as NAFTA 2.0, demanding that lawmakers eliminate drug corporation handouts and strengthen labor and environmental standards before voting on the final plan. 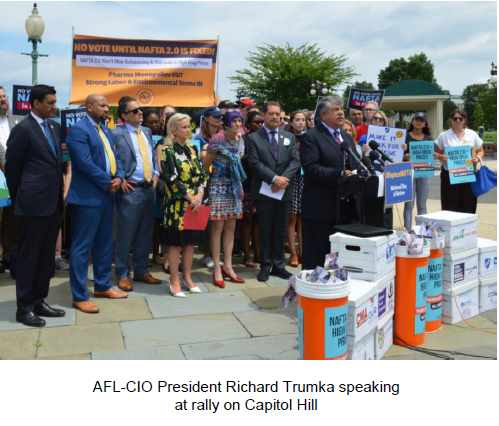 Opening the rally, Rep. Rosa DeLauro(CT) called on her colleagues to come together and reject the current NAFTA 2.0 plan, noting that it would lock in high drug prices. AFL-CIO President Richard Trumka followed, adding that the deal does not have proper labor protections in place. Other speakers at the rally

“The proposed USMCA trade deal will protect the monopolies and profits of pharmaceutical corporations while putting life-saving medicines out of reach for many patients who need them,” said Joseph Peters, Jr., Secretary-Treasurer of the Alliance. “Our members are sending a clear message to Congress: do not pass this trade deal until the prescription drug provisions are fixed.”

The AFL-CIO released its annual report this week analyzing the pay ratios between S&P 500 company CEOs and their employees, as well as historical trends in CEO and worker pay. The findings are disturbing.

Across all 500 companies, CEOs made on average 287 times more than the median worker. Additionally, while “rank-and-file workers” saw their pay increase by $7,858 over the past decade, the CEOs saw their average salaries increase by $5.2 million. 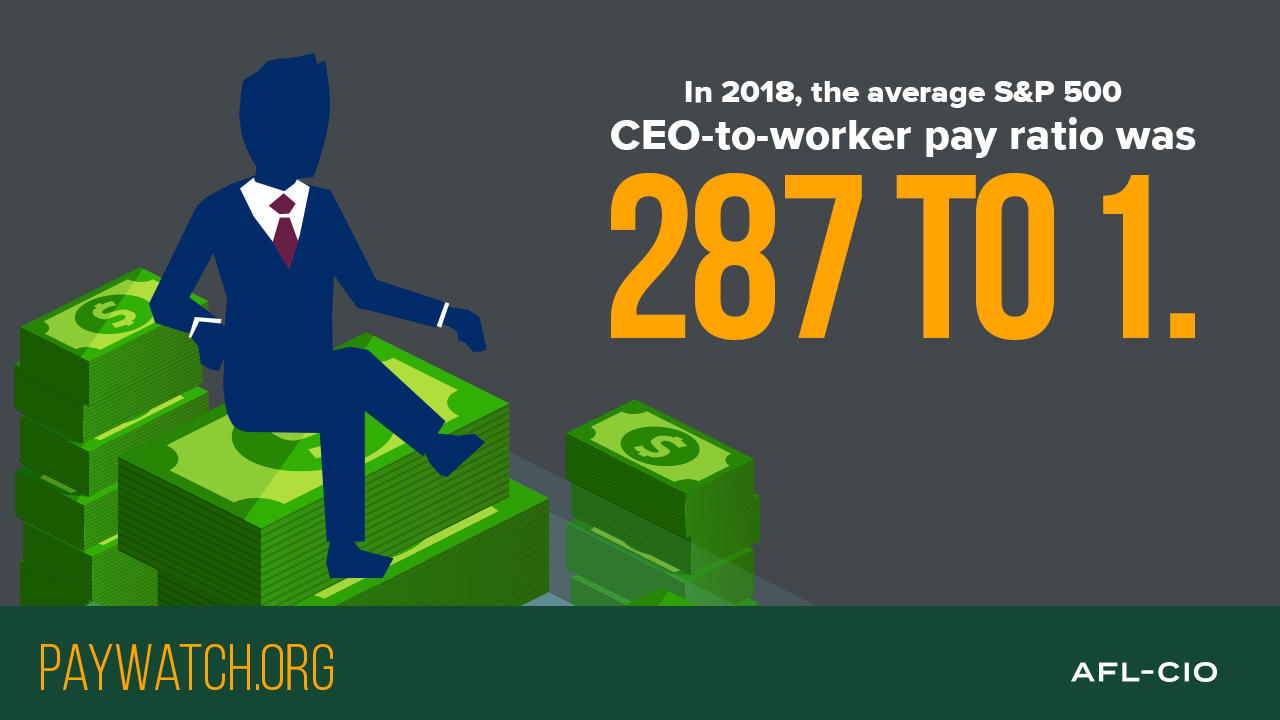 To explain the widening gap, the report looked at changes such as the 2017 GOP tax law. The “GOP Tax Scam” allowed corporate income taxes to fall by $93 billion in fiscal year 2018, while 60 of the most profitable corporations paid nothing at all in federal income taxes.

The report also found that many companies are engaging in egregious stock buyback schemes following the implementation of the new tax law. This results in higher short-term stock prices and increased CEO pay rather than the higher wages for workers that were promised when the law was written. The ten largest corporations that pursued these buybacks — including well-known companies like Apple, Microsoft and Facebook — saw their CEOs’ annual salaries increase by an average of 46% in 2018.

“Everyday Americans have the same purchasing power today as they did 40 years ago,” said Richard Fiesta, Executive Director of the Alliance. “The tax scam has widened the pay gap even further while the average worker is once again left behind.”

Over the past 20 years, as older Americans began requiring different forms of care, the number of assisted-living centers across the country increased by nearly 150 percent. Despite the dramatic change, until now there has been little discussion about updates to the facilities’ staffing and training guidelines. Eldercare experts are looking to the federal government to provide uniform guidance for these centers detailing how to appropriately train their staff members.

Without any federal oversight, many states have given assisted-living centers free-reign to decide how to train and hire their staff. Almost half of all states do not require substantial and updated training, and 38 states allow these centers to determine how many staff members they need.

This leads to gaps in the types of care that patients receive from state to state. For instance, Montana law does not require a set amount of instruction for staff members, but staff in Kansas must pass a 90-hour course and an accompanying exam.

Those who advocate for federal intervention are looking to the nursing home model for inspiration – especially when it addresses the role of Medicaid. For nursing homes, the federal government sets care and training standards while many residents finance their care through Medicaid payments. The same is not true for assisted-living patients, but a growing population is beginning to rely on Medicaid waivers to offset medical costs, prompting activists to call for the same federal oversight that nursing homes receive.

“Four in ten assisted-living patients are diagnosed with Alzheimer’s disease or other forms of dementia. It is clear that there is a need for specialized care in these facilities that only thoroughly-trained staff members can provide,” said President Roach. “State-level guidelines are simply not cutting it anymore. It is time to empower the federal government to give these facilities the tools they need so that patients receive the quality of care they deserve.”