The Alliance hopes you had a happy and safe 4th of July.

Kaiser Health News reports that House Speaker Nancy Pelosi is finalizing a planthat would allow Medicare to negotiate lower prices for more than 200 of the highest priced drugs. All payers, including employers and insurers, would benefit from the prices as well.

The plan is coming at a crucial time. According to CBS News, more than 3,400 drugs have boosted their prices in the first six months of 2019, an increase of 17% in the number of drug hikes from a year earlier. The average price hike is 10.5%, or 5 times the rate of inflation.

Government negotiation would both reduce out-of-pocket costs and lift spending burdens from Medicare, which is projected to take on the fastest-growing portion of drug spending over the next few years. Inflation-adjusted drug prices per capita increased from $90 in 1960 to $1,025 in 2017, and are projected to increase even more.

Additionally, the plan would authorize the Secretary of the Department of Health and Human Services (HHS), which includes the Centers for Medicare & Medicaid Services, to work with pharmaceutical corporations to drive down the cost of the 250 most-expensive drugs on the market. These drugs make up 78% of all prescription drug spending.

“This plan must be finalized, released and act acted on,” said Alliance President Robert Roach, Jr. “Lawmakers must protect seniors and all consumers now — many don’t have time to wait.”

New research shows that 18% of emergency room visits and hospital stays resulted in at least one out-of-network or surprise medical bill in 2017.

A “surprise medical bill” is a charge arising when an insured individual inadvertently receives care from an out-of-network provider. This situation could occur in an emergency when the patient has no ability to select the emergency room, treating physicians, or ambulance providers. Surprise medical bills might also arise when a patient receives planned care from an in-network provider (often, a hospital), but other treating providers brought in to participate in the patient’s care are not in the same network. These can include anesthesiologists, radiologists, pathologists, surgical assistants, and others.

These charges occurred more frequently in some states than in others. Patients in Texas, California, New Mexico, New York and Kansas were more likely to report having a surprise medical bill than the rest of the country. The analysis comes as state and federal lawmakers move to address the issue.

Texas recently passed a law to protect patients from high medical bills when insurance companies and medical providers can’t negotiate the price of treatment down. California’s state Senate is also working to pass a law that would end surprise medical bills for privately insured emergency room patients who go to an out-of-network hospital.

Members of Congress have tried to pass national legislation to end surprise billing. However, a lack of agreement between powerful lobbies like health insurers and health providers has stalled a legislative solution. The administration recently issued an executive order that will make medical prices for certain treatments and procedures at hospitals public; however, this could take years to go into effect and would not mean lower prices for consumers who may have no choice when seeking treatment, especially in an emergency.

“Two-thirds of Americans are rightly worried about how they would pay for unexpected medical bills,” said Joseph Peters, Jr., Secretary-Treasurer of the Alliance. “Surprise medical billing puts patients at serious risk for bankruptcy and may discourage people from seeking medical treatment. Congress and all state governments have an obligation to break the logjam and protect their constituents from this predatory practice.”

Despite dramatic increase to the average American’s cost of living, Congress has officially gone the longest period of time without increasing the federal minimum wage.

The last time that Congress raised the hourly wage was during the height of the Great Recession. Now, ten years later, it is still set at $7.25 an hour. Over this period, the purchasing power of the minimum wage decreased by 17%, costing workers over $3,000 in annual earnings due to inflation. Over the last decade, wealthy Americans have seen substantial increases in compensation while all other income groups saw their relative wealth diminish.

Democrats in the House introduced the Raise the Wage Act in January, which would double the minimum wage by 2024 and adjust the federal minimum to the median workers’ pay. It would also dispose of the lower minimum wage for tipped service workers, which has not changed since 1996. The bill has over 200 cosponsors but so far it has not passed. 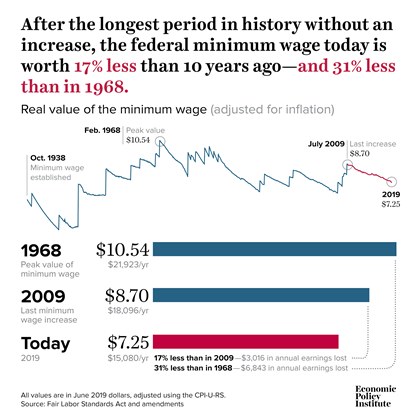 The majority of voters, time after time, express widespread support for a $15 minimum wage. Fast-food workers, especially, have mobilized across the country around the “Fight for $15” movement, encouraging states like California, Massachusetts and New York to pass bills that would raise their state’s minimum wage to $15.

Like everyone, older Americans see added benefits from a higher minimum wage: additional payroll tax receipts from higher wages strengthens the Social Security Trust Fund for current and future retirees. Adults 55 and older make up 14.6% of workers who would profit from an increase in the minimum wage, and the $15 figure would translate into a raise for more than 5.8 million seniors.

“No American should have to work multiple jobs just to keep their lights on and have a secure retirement later,” said Alliance Executive Director Richard Fiesta. “Congress needs to pass the Raise the Wage Act.”

On June 20th, the Alliance, along with other organizations, rallied for lower drug prices at an 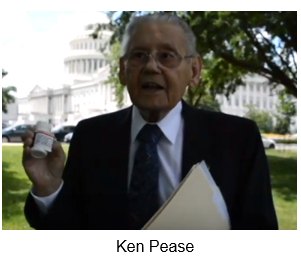 event on Capitol Hill. Alliance Executive Board Member and American Postal Workers Union retiree Ken Pease spoke at the rally about how prohibitive drug costs have caused him to forgo a doctor-recommended medication for his thyroid disease. Mr. Pease, before speaking at the rally, recorded a video about his experience and referred to the drug he currently takes.

The full video can be found here.