In a Significant Win for Retirees and Workers, Butch Lewis Act Passes in the House

After six months of hearings and markups, the House of Representatives passed H.R. 397, the Rehabilitation for Multiemployer Pensions Act, on a bipartisan vote of 264-169. The bill, also known as the Butch Lewis Act, protects pension plans that are at risk of insolvency. It allows the Department of the Treasury to administer low-interest loans to the plans, saving the Pension Benefit Guaranty Corporation $47 billion over 10 years, and ensuring that retirees will receive their full benefits.

“Workers and retirees worked hard to earn their pensions and they had no role in causing these plans to be at risk of insolvency,” said Robert Roach Jr., President of the Alliance. “Nevertheless, we are on the verge of a financial disaster. Passing the Butch Lewis Act in the House was a significant step in the right direction for workers and retirees alike, and now we need the Senate to do the same!”

“The Butch Lewis Act would provide loans to these plans, to be repaid in full in 30 years,” added Richard Fiesta, Executive Director of the Alliance. “There is ample precedent for this action. Time and again the U.S. government has provided bailouts or loan guarantees to troubled industries facing dire circumstances. Billions of dollars in bailouts have gone to banks and corporations. Congress should extend the same assistance to these workers.”

The legislation is named for Butch Lewis, a retired truck driver and Teamster from West Chester, Ohio. After only being retired for one year, he learned that his earned pension benefits were at risk of being cut from $3,349 a month to $1,999. The stress from this was overwhelming, and on New Year’s Eve 2015, Mr. Lewis died of a massive stroke. He was 64. His wife, Rita Lewis, is now an advocate for protecting pensions.

Today the House Oversight and Reform Committee held a hearing on the impact that the high prices being charged by big drug corporations are having on Americans’ health and financial security.

Before the hearing, Maryland/DC Alliance member Catherine Easterling spoke at a Capitol Hill press conference about the challenges she is having paying for her prescription drugs. She joined Sen. Tina Smith (MN), Rep. Lloyd Doggett (TX), fellow Alliance members and representatives from allied groups — including Affordable Insulin NOW and Health Care Voter — in drawing attention to the personal toll the skyrocketing prices take on millions of Americans each year. 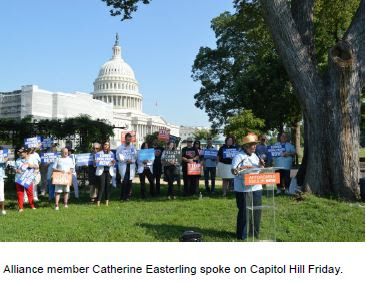 Ms. Easterling said she paid thousands out-of-pocket last year for seventeen drugs she needs to survive. She was forced to sell her car and faces increasing credit card bills due to the drug costs. 4.7 million adults aged 65 and older live under the same conditions.

“I need help and I know I speak for so many others who are in the same boat as me but aren’t able to be here today,” she said.

“We must address the strategies used by drug corporations to keep their prices high — and make huge profits for their executives.”

The Senate Finance Committee passed a bill aimed at lower prescription drug prices on Thursday. The bill would cut prescription drug costs by requiring name-brand pharmaceutical manufacturers to pay rebates to Medicare if their prices rise above inflation and caps seniors’ out-of-pocket spending in Medicare Part D for the catastrophic phase by shifting costs to health plans and drugmakers rather than the government.

The committee held a markup of the bill on Thursday, passing it after lengthy debate and several amendments, by a vote of 19 to 9. An amendment from Senator Debbie Stabenow (MI) that would have allowed Medicare to negotiate prices for about 250 drugs that don’t have competition failed in a 16-12 vote. The powerful drug corporation lobbying group, PhRMA, expressed its opposition following the markup.

“This is another case of taking a step in the right direction and it is good to see some bipartisan consensus,” said President Roach. “However, what we really need are bold policies — like allowing Medicare to negotiate prices with the drug corporations — to bring pharmaceutical executives to the bargaining table and end the huge price increases we are seeing.”

Having heard false scare tactics for years many millennials (people aged 23 to 38) tell pollsters they won’t be able to rely on Social Security. A recent Center on Budget and Policy Priorities report, however, refutes that belief. It outlines six key ways that millennials’ and other young people can and will benefit from Social Security’s earned benefits.

●     If, as a child, their parent became disabled or died, millennials would receive a Social Security child benefit. This has lifted millions of children and families out of poverty.

●     Young adults have a one-in-three chance of becoming disabled or dying before they reach retirement age. Social Security coverage can help make up for the fact that the majority of young people lack life and disability insurance.

●     Social Security will also provide millennials with most of their income as they age, since they are less likely to have pensions or an employer-based retirement plan.

●     The program’s benefits ease millennials’ bank accounts by providing parents and loved ones with an income so that millennials can put more towards other things, like buying a house or starting a family.

●     Seven in ten millennials agree that it is important to protect Social Security, even if that means paying more taxes.

●     A stronger Social Security would ease younger people’s anxiety about the program’s future as they get closer to retirement age.

“Social Security is not just for retirees. It’s for all Americans no matter their age,” said Joseph Peters, Jr., Secretary-Treasurer of the Alliance. “We must all work together to strengthen and protect the program for generations to come.”

There are several bills in Congress right now that expand Social Security by making the wealthiest Americans pay their fair share into the system.

This week, the House Ways and Means Committee held a hearing on H.R. 860. the Social Security 2100 Act, introduced by Rep. John Larson (CT). Another bill in the House is H.R. 2654, the “Strengthening Social Security Act of 2019,” introduced in May by Representatives Linda Sánchez (CA) and Mark Pocan (WI). Read our fact sheet for details on these bills.

On Tuesday, the Administration proposed a rule that would place restrictions on states as they determine who is eligible for the Supplemental Nutrition Assistance Program (SNAP). The move would force 3.1 million Americans, including many seniors, off the program.

Forty-three states currently allow automatic enrollment in SNAP, also known as Food Stamps, if they participate in the Temporary Assistance for Needy Families (TANF) program. The administration’s proposal would implement a review process of people’s incomes to determine SNAP eligibility.

“This is an outrageous and cruel proposal. Millions of retirees and families will go hungry without this modest nutrition assistance,” said Executive Director Fiesta.

“This rule would take food away from families, prevent children from getting school meals, and make it harder for states to administer food assistance,” said Sen. Stabenow, ranking member of the Senate Agriculture Committee, which administers the program. “This is yet another attempt by this administration to circumvent Congress and make harmful changes to nutrition assistance that have been repeatedly rejected on a bipartisan basis.” 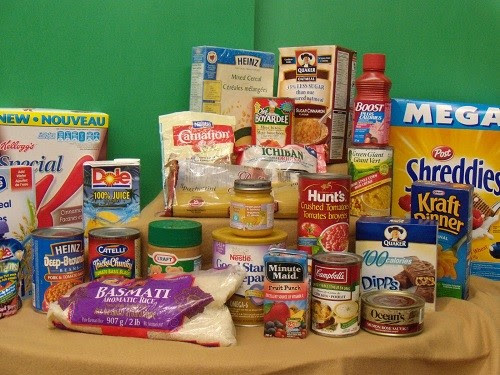 Older Americans rely on the program to put food on the table. Twenty-two percent of SNAP households (4.7 million) had at least one eligible adult age 60 or over. However, only 42 percent of eligible seniors are enrolled in the program due to a complicated application process and confusion about eligibility laws.